How a VOR Works


VOR is short for Very High Frequency (VHF) Omni-directional Range. When VOR was invented it replaced the Low-Frequency Range, which had only four legs. Thus the term “Omni-directional”, indicates that a VOR generates courses in all directions, which is its distinctive characteristic.
VOR is also distinct from Non-directional Beacons (NDB) in that the directional signal is embedded in the VOR signal. With an NDB there is no directional information embedded in the signal thus the airborne radio must have direction finding abilities.
I have created a computer animation, shown below, that explains in pictures better than I can do it in words how a VOR station works.
Basically the VOR transmits two signals. The “phased signal” is transmitted outward in a spiral, shown in blue in the animation. A second signal is transmitted simultaneously with each revolution of the spiral. This second signal acts as a timing reference. Your VOR receiver picks up both signals and acts like an oscilloscope creating a standing wave of both signals. The phase difference between the signals represents the radial you are on. A radial is simply your bearing awayt from the VOR.
In the animation I have slowed the process down so that you can see it. In a real VOR the signals are transmitted 30 times per second and move out at the speed of light.
For more details of how VOR works here is an article on Wikipedia.
In the animation you can drag the airplane around the VOR to all the different radial. As you do so watch the standing waves at the bottom. You will notice that the phase difference between the red and blue waves corresponds to the radial you are on.

Radials are Relative to Magnetic North

A radial is by definition a direction, or course, outward or away from the station.
When a VOR station is installed it must be calibrated. In most parts of the world VORs are calibrated so that the zero radial is oriented toward Magnetic North. In the simulation above the VOR is initially oriented to True North, but you can adjust the variation slider in the animation and you will see that it reorients the VOR to Magnetic North. All the calibration actually does is change the starting point of the timing pulses (the red pulses) so that a new one starts as the spiral passes Magnetic North.
In northern Canada VORs are oriented to True North.
Now that we know how a VOR station works and how our radio interprets the information let’s examine how the course is displayed to the pilot in the cockpit

Display of VOR Course in the Cockpit

Three different instruments are in common use for displaying VOR information to pilots in the cockpit. In order from oldest to most modern they are:
I will explain each in order.
There is a simulation below that you can use to explore and compare how these three indicator systems work. You can drag the airplane around to see how the RMI, Standard VOR Indicator and HSI react. You can change the course using the OBS and CRS knobs (just hold the mouse button down on the knob.) You can also turn the airplane by adjusting the heading bug.
Use the “Sectors” button to see how an HSI or Standard VOR Indicator dissect the world into 8 unique sectors.

The oldest method of displaying VOR information is called an RMI, short for Radio Magnetic Indicator. An RMI is simply a rotating needle on top of a heading indicator.
In the animation below the blue needle is the RMI-needle. I have chosen to install the RMI-needle as part of an HSI (I will describe HSI in a moment.) It is common practice these days to install the RMI-needle as part of an HSI rather than as a stand-alone instrument. But, some airplanes with older avionics have the RMI as a separate instrument. Either way it works the same.
In the animation drag the airplane around and notice how the blue RMI-needle reacts.
Most pilots would say that the RMI-needle is pointing at the VOR. In reality it is rotating so that the tail of the RMI-needle indicates which radial you are on. The difference between these two points of view is rather subtle. As long as the heading card is accurately indicating your heading there is no difference. But should the heading system fail the RMI-needle no longer points at the station, but the tail of the needle would still tell you what radial you are on. I will write an article about failure modes at a later time. 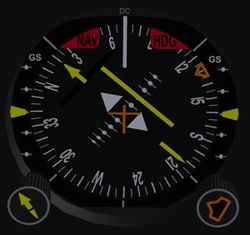 In the animation above you can set the HSI to any course you like. Notice that the Track-Bar rotates as you change the course. You can also make a turn by changing the heading bug using the HDG knob. When the airplane turns the Track-Bar turns and that is the innovation that makes it so much easier to visualize where your desired course is relative to your airplane.
Many pilot believe that when the CDI is deflected left they need to turn left and when the CDI is deflected right they need to turn right. With an HSI that is true, but with a Standard VOR Indicator it is not necessarily true. I will explain this point in an upcoming movie. This difference is the reason why the HSI really does give you situational awareness, hence the name. It is always safe to say that you should turn toward the CDI with an HSI, but with a Standard Indicator that is not always the case.
After many decades of training IFR pilots have have noticed that many pilots using HSI for the first time do not discriminate the TO/FROM flag very well. On the HSI the TO/FROM flag is a small triangle which points toward the arrowhead to indicate TO or toward the tail of the Track-bar to indicate FROM. Compared to the flag on the Standard Indicator it is quite subtle and many pilots fail to notice when the flag “flips” so watch out for that.
As with the standard indicator your best bet is to sit down with an experienced IFR instructor when exploring the animation above and do a side-by-side comparison of the standard indicator and the HSI.
Publicado por altovuelo en 18:24