Your Engine Failed After Takeoff. Should You Return To The Runway? 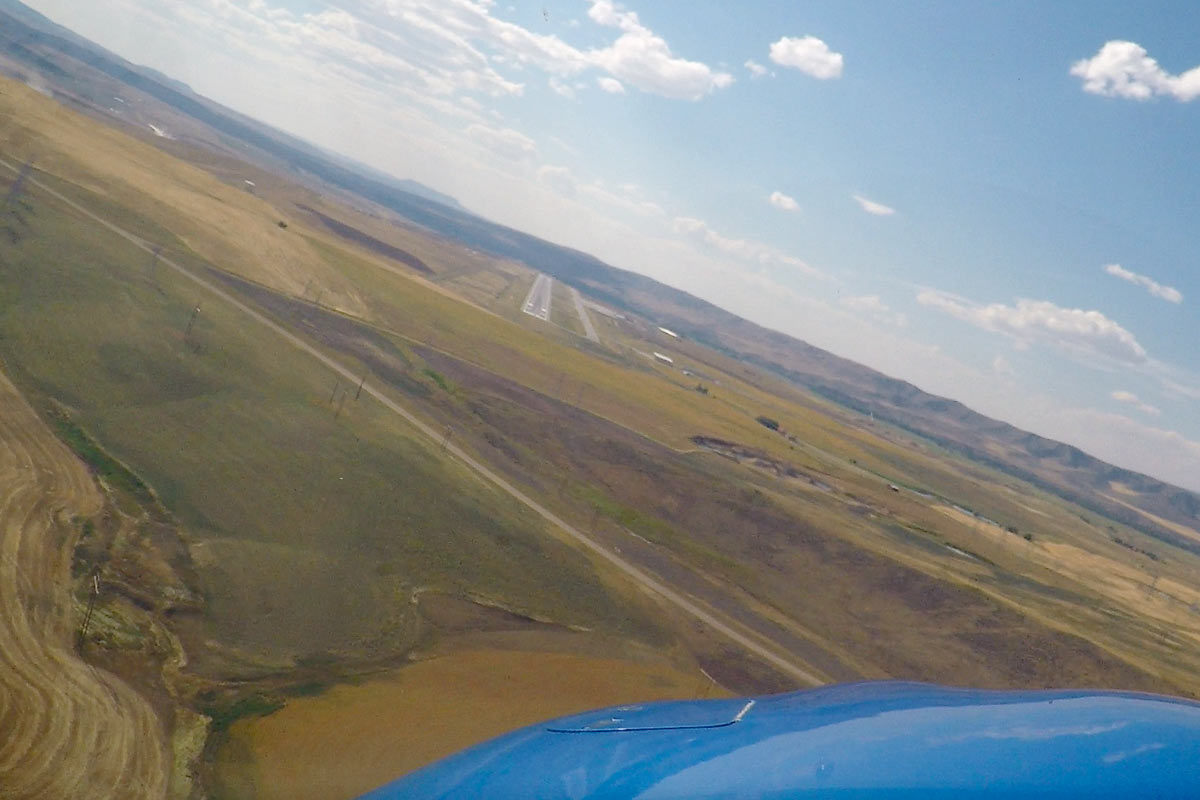 Should you return to the airport, or land straight ahead? It depends.....
A Stark Example of the "Impossible Turn"
According to AOPA, on October 28th, 2006, a Vans RV-6 experienced a loss of engine power at 500 feet AGL during climb out from Turlock Municipal Airport, CA. The pilot responded by initiating a turn back toward the runway. During the maneuver, the airplane stalled and the pilot attempted to recover. The airplane entered a secondary stall, descended rapidly, and collided with the ground, eventually coming to rest inverted. The pilot and a passenger were seriously injured. 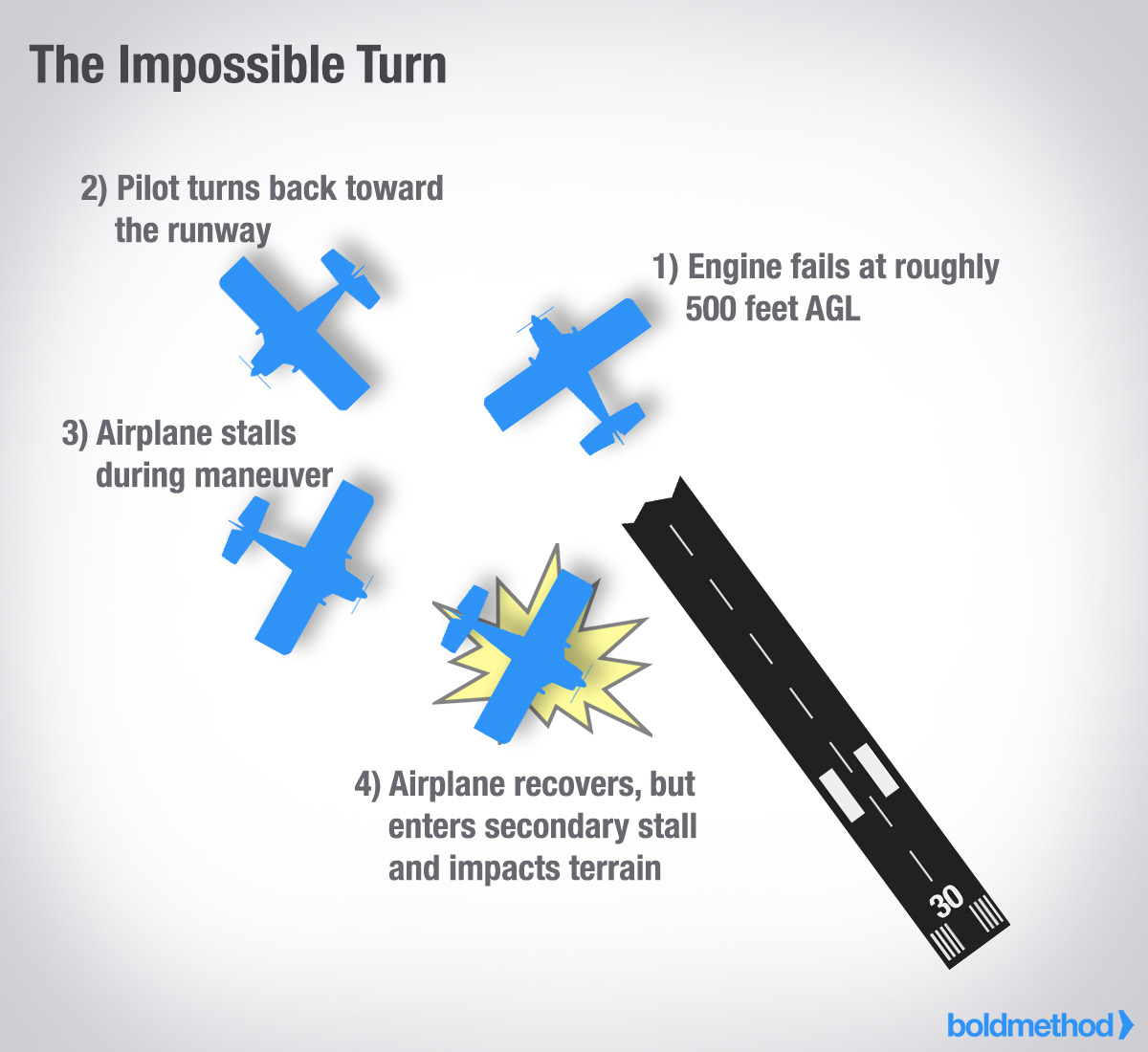 A low altitude power loss is a time-critical emergency, especially on departure. Unless you've thoroughly planned an emergency landing point for departure (which you should do), the surprise of the engine failure will leave you with few landing options. Your initial reaction may be to return to the runway, which under some circumstances is acceptable. But more often than not, your safest option is to land somewhere straight ahead of you.
There's a lot that goes into the "impossible turn," so let's dig a little deeper.
Your Knowledge Of Aerodynamics Is Crucial
As you roll into a turn, your vertical lift decreases and your horizontal lift increases. If you don't add back pressure, your plane will start to descend. During a turn, to keep your vertical lift the same (so you don't descend), you need to increase total lift by increasing your angle of attack (AOA). So how do you do that? Simple: you apply back pressure on your elevator. 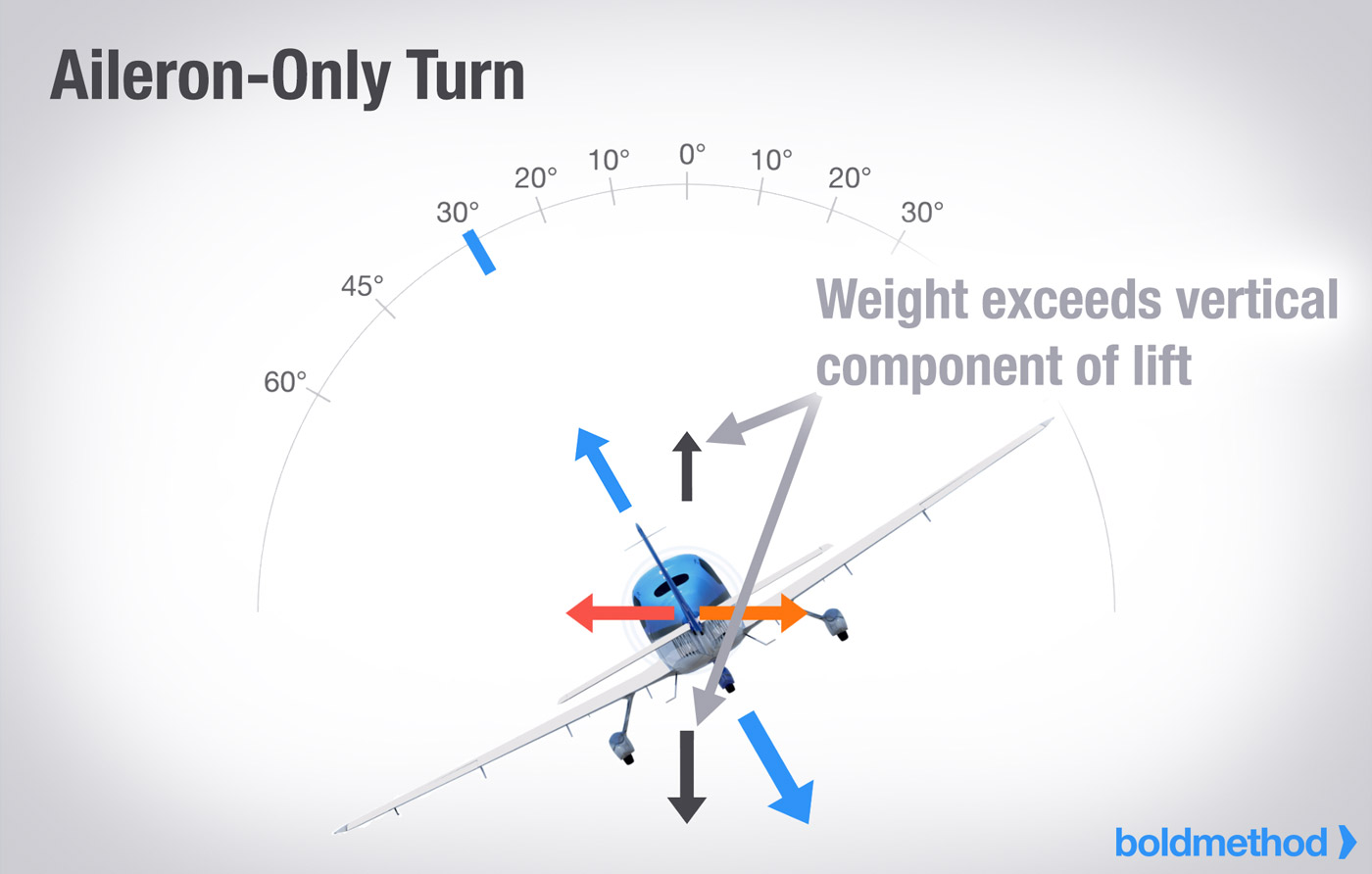 That said, this doesn't work for a sustained period of time during an engine failure for one simple reason...power. If you lose engine power, you won't produce enough thrust to maintain level altitude and constant airspeed during a turn. Additionally, on propeller driven airplanes, you won't get the benefit of extra airflow over your wings from prop-wash. This also decreases lift after an engine failure.
Once you slow to your best glide speed, you're descending in the turn, and chances are, you're descending pretty quickly.
Returning To The Runway? Keep These Hazards In Mind
First, you probably took off with a headwind. If you make a return to the runway, you'll now be faced with a tailwind, which increases your groundspeed and rushes your ability to fly a safe approach and stop on the runway. There's not a lot of margin for error with a strong tailwind (assuming you can actually make it back to the runway). 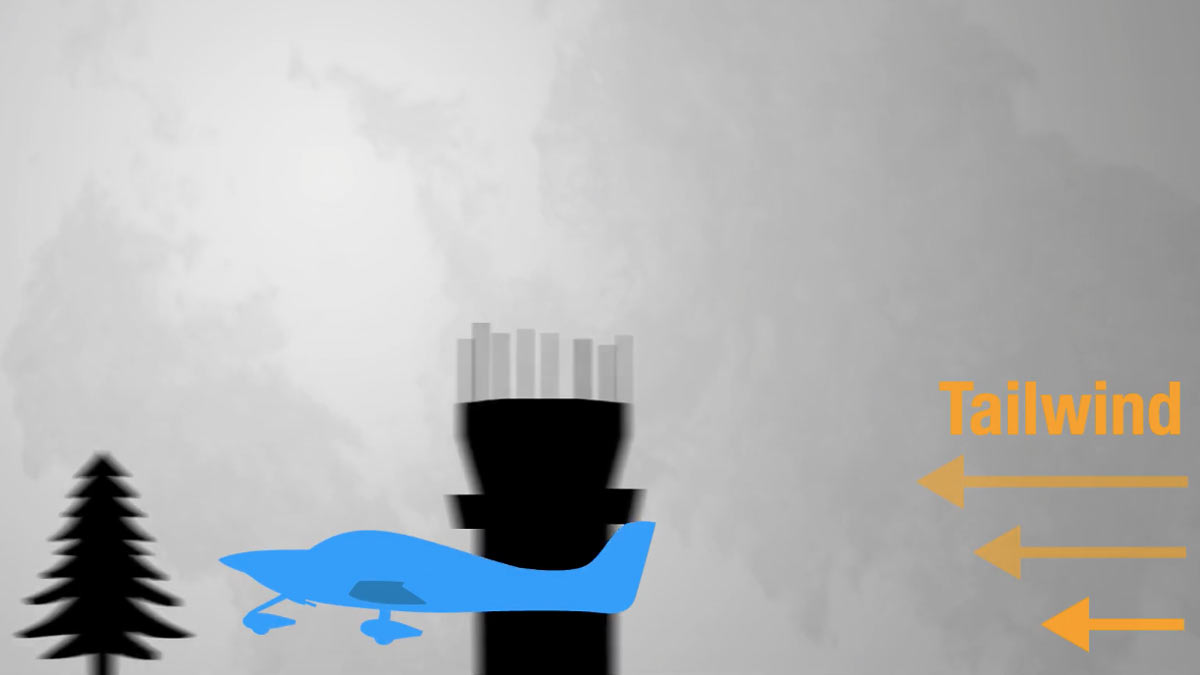 Second, as your airplane loses altitude during the turn, it's possible you could contact the ground in a bank. This could result in your aircraft cartwheeling across the ground...not an ideal outcome.
Third, the increasing groundspeed due to the tailwind could lead you to prematurely slowing the aircraft below stall speed. With no altitude to trade for airspeed, you'll be out of luck in this scenario. 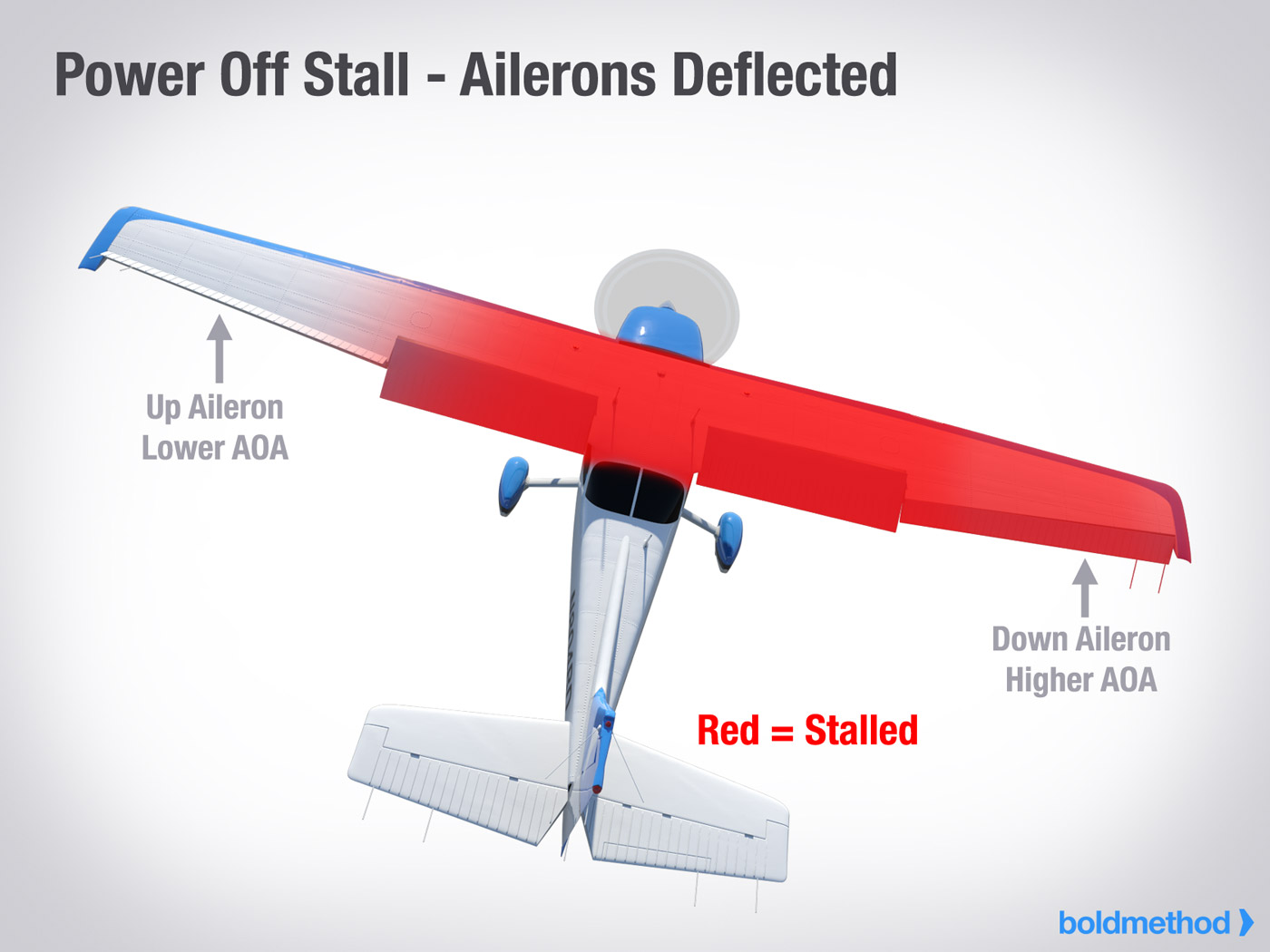 Rather than returning to the runway, the FAA advises "it is safer to immediately establish the proper glide attitude, and select a field directly ahead or slightly to either side of the takeoff path."
Practice (Can) Make Perfect
In the Airplane Flying Handbook, the FAA recommends pilots experiment with their airplanes to determine a practical decision height for takeoff. At a safe altitude, reduce your power to idle, start a 180 degree turn to a simulated runway, and see how much altitude you lose. According to the FAA, "by adding a safety factor of about 25 percent, the pilot should arrive at a practical decision height" from this testing.
That said, the ability to simply make a 180 degree turn does not guarantee that the departure runway can be reached in a power-off glide. Wind, distance traveled during climb, height above the ground, and glide distance are all critical factors. In addition, the turn back to the departure runway will require more than a 180 degree change in direction.
The FAA provides the following example:
Consider the following example of an airplane which has taken off and climbed to an altitude of 300 feet above ground level (AGL) when the engine fails. After a typical 4 second reaction time, the pilot elects to turn back to the runway. Using a standard rate (3 degree change in direction per second) turn, it takes 1 minute to turn 180 degrees. At a glide speed of 65 knots, the radius of the turn is 2,100 feet, so at the completion of the turn, the airplane is 4,200 feet to one side of the runway. The pilot must turn another 45 degrees to head the airplane toward the runway. By this time, the total change in direction is 225 degrees equating to 75 seconds plus the 4 second reaction time. If the airplane in a power-off glide descends at approximately 1,000 fpm, it has descended 1,316, feet placing it 1,016 feet below the runway. 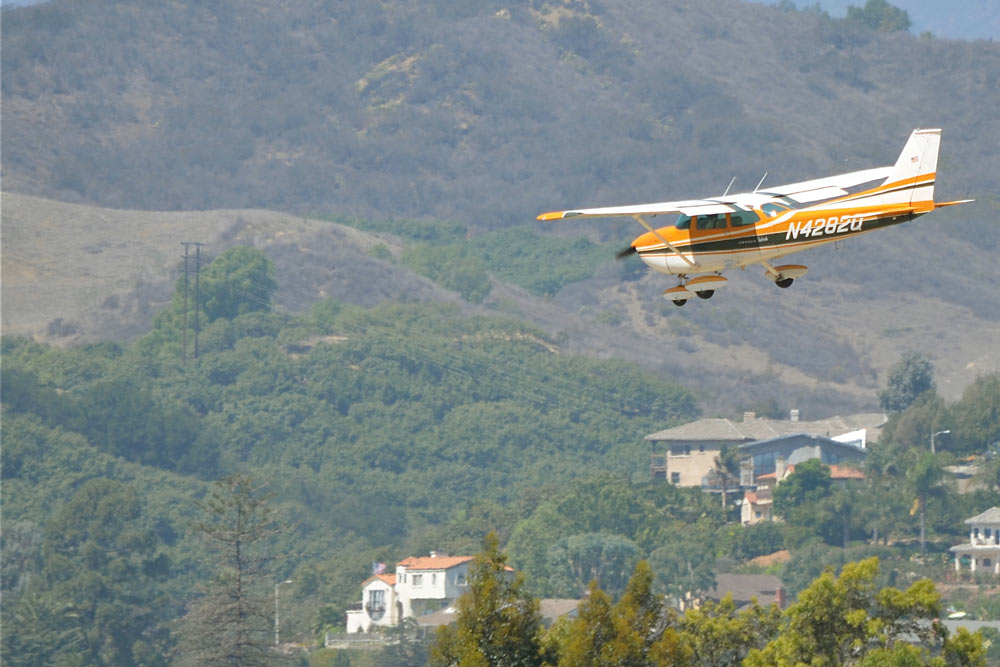 newagecrap
This Is Why You Brief Departures

You should have a decision altitude on takeoff for engine failures, as well as when you'll plan a return to the airport. During your takeoff briefing, include a go/no-go point for the "impossible turn." If you don't have a number in mind, and knowledge of how much altitude you'll lose in a turn, it's usually better to pick a landing point ahead of you, rather than the runway behind you. Take into account wind, altitude, aircraft performance, glide distance, and personal comfort before making the decision.
The "Sully Factor"
As you know from the "Miracle on the Hudson" story, the human factor is an important piece of the puzzle, often left out during briefing. It's hard to predict how a pilot will react when faced with a serious emergency at low altitude, but one thing is certain...your response will not be immediate.
It will take you time to process the emergency, and you may even try troubleshooting (not that it's a bad idea, you should run an engine failure checklist if you have time). But, even taking a few seconds to troubleshoot could take away hundreds of feet of potential altitude.
Publicado por altovuelo en 17:09