Did you know that GPS isn't the only form of RNAV? While the two acronyms are often used interchangeably, there's a lot more to RNAV than just GPS.

"Area Navigation" (RNAV) allows an aircraft to navigate between two points within the coverage zone of station-referenced navigation systems. Instead of having to go directly from one ground-based station to the next in a zig-zag pattern, RNAV allows aircraft to fly directly to any point within the coverage zone of the station being used. This "direct-to" capability often allows aircraft to bypass published routes, freeing up more airspace for traffic.

RNAV also allows aircraft to fly instrument approaches into airports that don't have any ground-based navigation stations, like a VOR or Localizer. 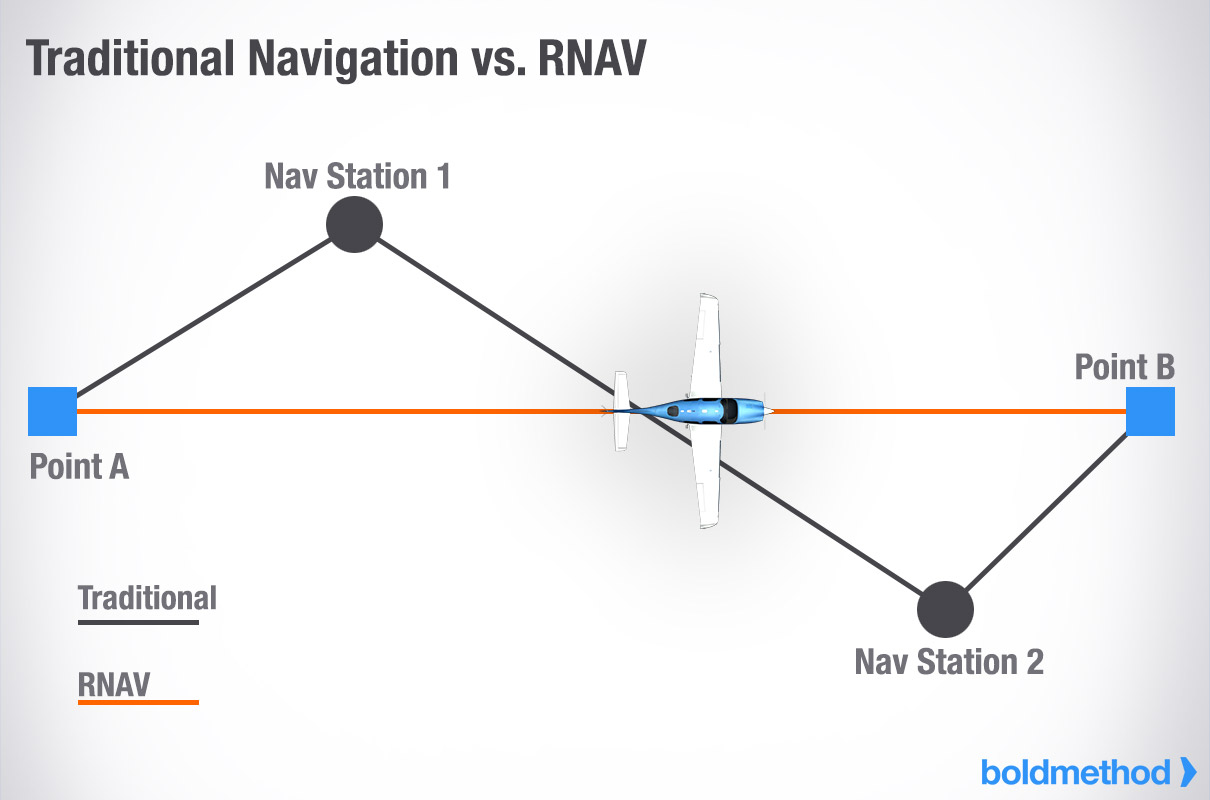 RNAV Routes Have Been Around Since The 1970s


According to Jeppesen, the first RNAV en-route charts were published in 1968 when Narco introduced their CLC-60 RNAV computer to the market. This course-line-computer analyzed information from previously-installed VOR and DME receivers.

To use the CLC-60, two knobs controlled "radial" and "distance." If you wanted to "move" the VOR station 12 miles out on the 180 radial (this is just like creating a waypoint 12 miles to the South of a VOR), you'd set "180" in the radial window and "12" in the distance window. Unlike a standard VOR instrument, a full-scale deflection on the CLC-60 was 2 miles, whether you were 1 mile from the station or 50 miles from the station.


An RNAV route could be utilized by inputting a series of VOR Radials and DMEs to make a navigable course. Each "waypoint" of the course had an associated radial and DME from the VOR being used. Creating a direct route could shave off substantial mileage compared to victor airways, which rely on routes between NAVAIDs. For this to work, however, you needed to remain within the coverage limits of the VOR and DME. 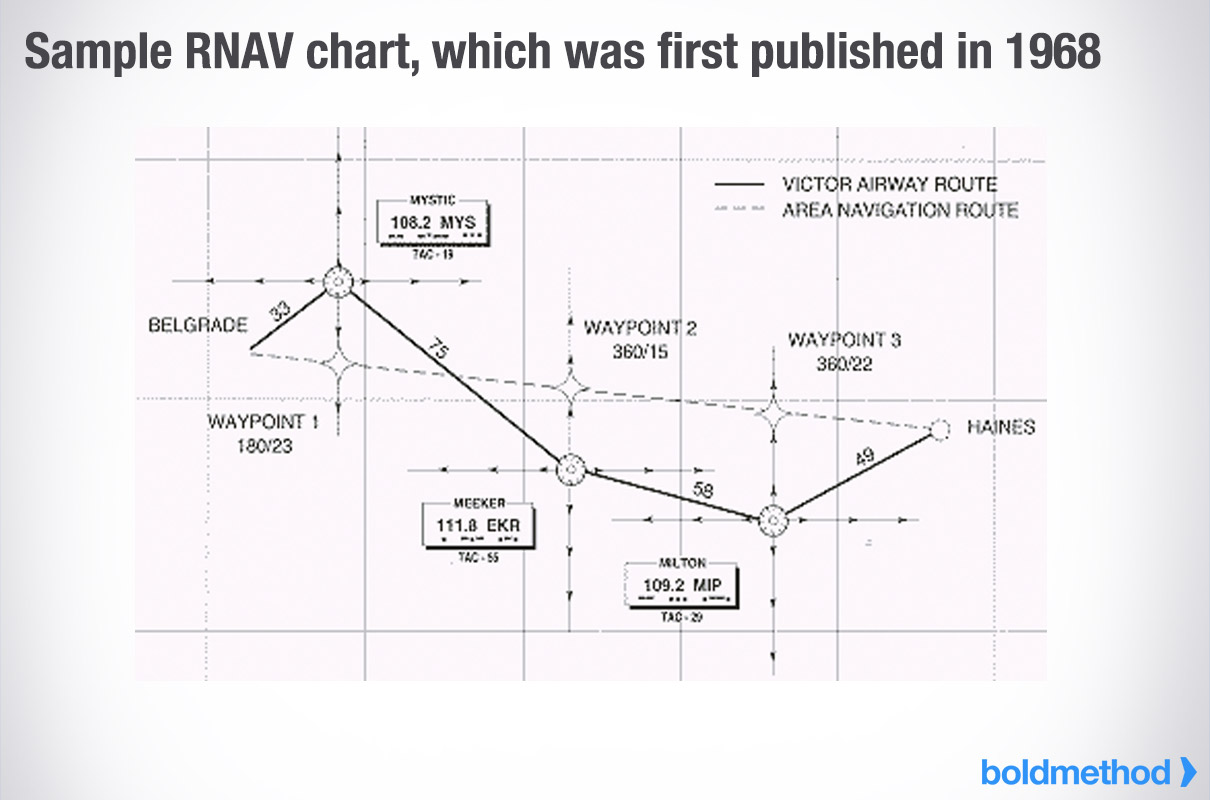 
The first GPS satellite was launched in 1978 by the Department of Defense. Initially, GPS was only available for government and military use. But by 1993, a full 24-satellite constellation became operational and was opened to public use.

Using the same basic concept as VOR RNAV, as long as you're within the coverage range of GPS reception and your receiver is functioning properly, you can navigate point to point. For an aircraft to get a 3D location, the GPS receiver must get a reliable signal from 4 satellites simultaneously. With GPS available and accurate nearly all of the time, it's become the go-to source for RNAV navigation. 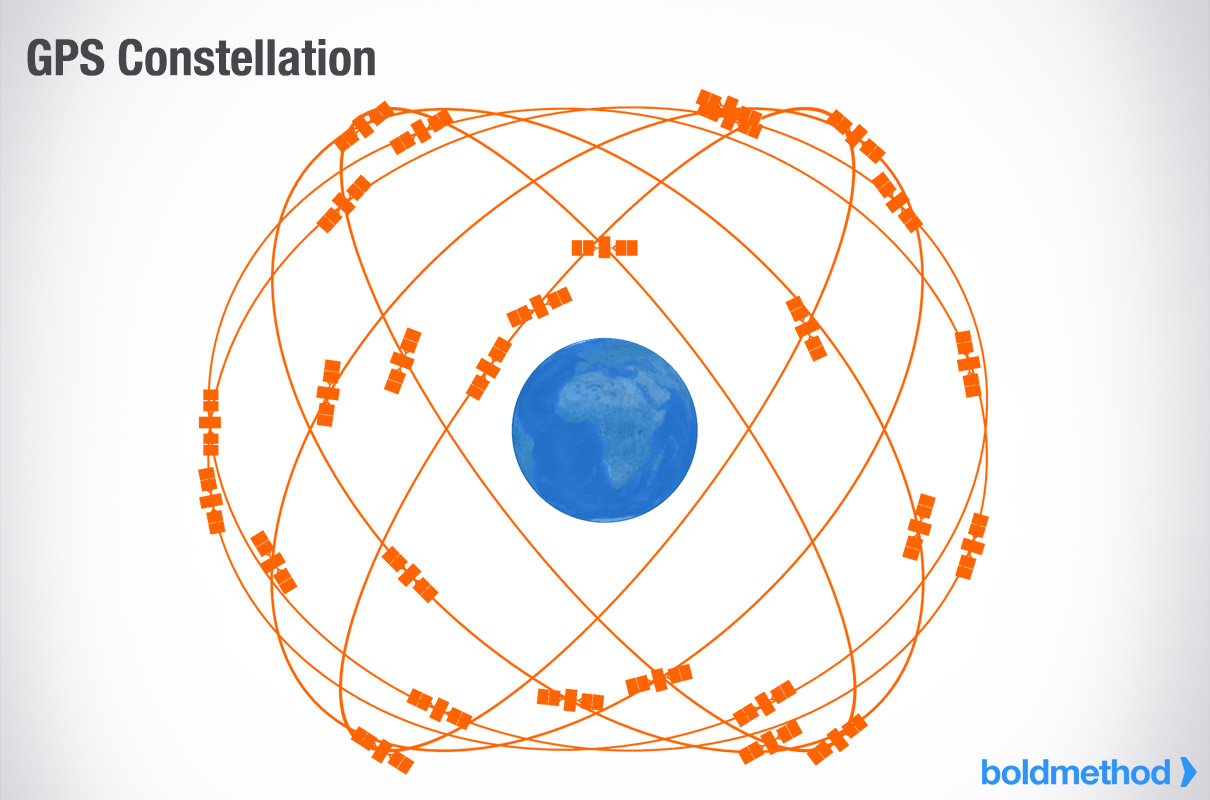 An FMS Uses It All


Flight Management Systems (FMS), which are typically found on business and airline jets, allow you to enter a series of waypoints and instrument procedures that define a flight route. If waypoints and procedures are included in the navigation database, the computer calculates the distances and courses between all waypoints in the route. During flight, the FMS provides precise guidance between each pair of waypoints, along with real-time information about aircraft course, groundspeed, distance, estimated time between waypoints, fuel consumed, and fuel/flight time remaining. While most FMS systems use GPS, that's not their only source of information.

Many FMS systems in large aircraft are linked to an Inertial Navigation Unit (often times called an Inertial Reference System, or IRS), which is comprised of lasers and gyros that determine aircraft flight path, altitude, and attitude. And that's not the only extra source of information for an FMS. Most FMS systems can use GPS, IRS, VOR, LOC, and DME receivers to provided position information to the FMS. If one form of navigation becomes unreliable, backup navigation aids can be used for continuous position information. 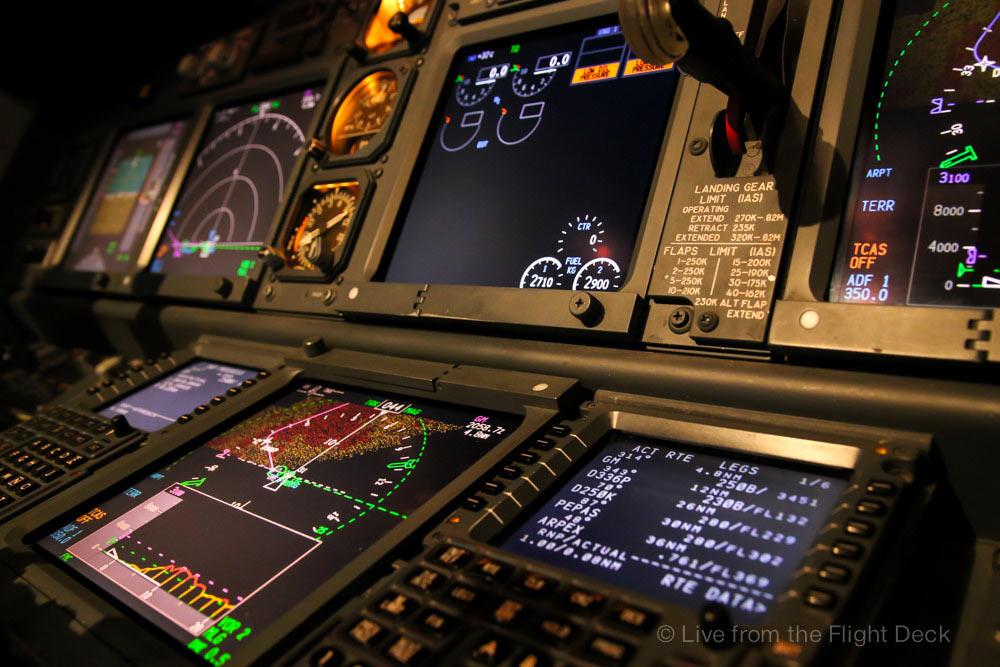 
Approved RNAV Systems, And When To Use Them

According to the AIM these are a few RNAV systems that can be approved. Keep in mind, the specific equipment and certification goes far beyond this list:

DME/DME/IRU systems don't rely on GPS, and instead, utilize multiple DME stations and an Inertial Reference Unit to get position information. While GPS may initially provide the IRU with location information for calibration, it does not rely on GPS for operation.

Required Navigation Performance (RNP) is a form of navigation that allows an aircraft to fly directly between two 3D points in space. The fundamental difference between RNP and RNAV is that RNP requires on-board performance monitoring and alerting capability. Think of this as a computer system that's constantly self-assessing and ensuring the reliability of navigation signals and position information.

According to GE Aviation, "RNP approaches with RNP values down to 0.1 allow aircraft to follow precise three-dimensional curved flight paths through congested airspace, around noise sensitive areas, or through difficult terrain." Specific testing and equipment are required to become RNP certified. Generally speaking, you won't fly RNP procedures until you're flying airline or corporate aircraft. 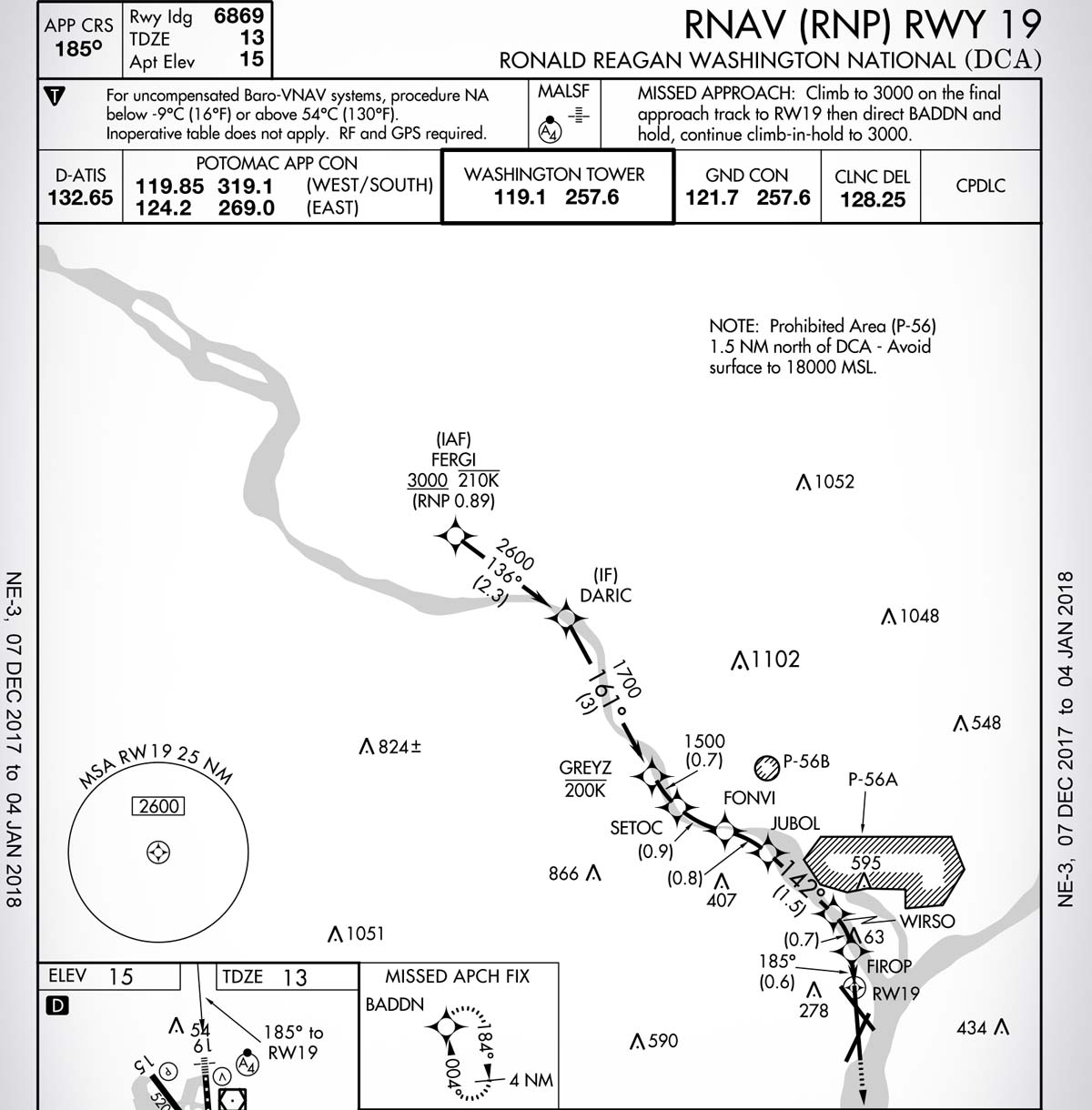 So, Does RNAV Always Mean GPS?


For most general aviation pilots today, yes. But that doesn't mean there aren't other forms of Area Navigation. In recent history, course line computers were the most basic form of RNAV. While GPS doesn't automatically equal RNAV, it's the most common system found in cockpits around the world, especially for piston aircraft.
Publicado por altovuelo en 19:51